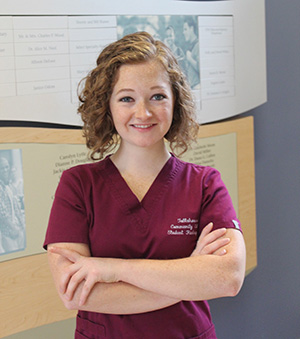 In addition to her success in the classroom, Hybart has the “soft skills” graduates need to be successful in healthcare, said her lab instructor, Nancy McKee.

“Carrie is just such a truly nice and caring person. She does what she is supposed to do with no complaining. And because of these traits she will be the type of technologist that not only will take excellent radiographs, but will take care of the patients in a very compassionate way.”

Hybart had already earned an Associate in Arts degree from TCC when she decided to enter the Radiologic Technology program in early 2015. She knew she wanted to help people, but she was not sure whether healthcare was right for her.”

“I was that kid, watching medical shows on TV made me queasy, I couldn’t stand to watch stuff. Coming into the program, I was a little bit nervous because I didn’t know how I would handle it. But I was fine. It takes a little while to adjust, but you do.”

Now Hybart is convinced she made the right choice. She especially likes the fast pace of work in the emergency room.

Hybart gave the example of the “controlled chaos” of the ER in the aftermath of a serious vehicle accident. “It is chaos and it’s terrible. It’s traumatic, and people are hurt and injured. But seeing how well everyone pulls together and just being a part of that team was really neat to me.”

“I really appreciate the fact that the second week of the program, they already had us out in clinicals. At that point, it was mostly observation, but it was really good exposure for me and for all of the students to make sure it’s really something you’re interested in pursuing.”

The next steps for Hybart are taking the board exam in mid-December and then beginning her job search, both in Tallahassee and beyond.

“The TCC program’s schedule is very demanding and it requires a lot of the students, so typically students from our program are hired pretty well.”

Hybart also hopes to continue her education and training, eventually earning a bachelor’s degree and perhaps also becoming qualified in a specialty such as radiation therapy or magnetic resonance imaging.