The TCC Foundation launched the campaign in conjunction with the College’s 50th anniversary in 2016, with the goal of raising $10 million.

Heather Mitchell, executive director of the Foundation, announced that the campaign has in fact raised $13,068,888. Mitchell revealed the big number by lining up a long row of students sporting t-shirts bearing the relevant numerals.

Karen Moore, CEO of Moore Communications, who chaired the fundraising campaign, put the results in perspective.

“This is the largest campaign in the College’s history, and we received the single largest donation in our history,” said Moore, referring to an anonymous donation valued at more than $7.8 million.

“This is a great day for our students, faculty, staff and community,” Moore said. “Eighteen months ago, when we started this campaign, we decided to dream big and go for $10 million. Since then, what we have seen is how much support there is for TCC in our community.” 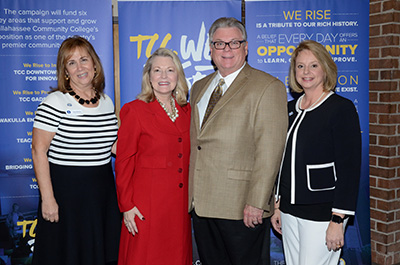 Pam Butler, founder of Aegis Business Technologies and president of the TCC Foundation Board of Directors, agreed. Butler said she and other TCC supporters found it easy to convince prospective donors to give.

“Every time we talked with someone, we heard stories about how TCC had touched their lives or their children’s lives,” said Butler.

Jim Murdaugh, TCC president, applauded the accomplishment as a shared success on the part of College supporters.

“I am very grateful for the alumni, friends, businesses and others who made generous donations to our college during this 50th year celebration,” said Murdaugh. “These gifts represent investments in access and opportunity for students that will pay dividends for years to come.”

Murdaugh listed other milestones that the College reached during its 50th year, including launching its first four-year-degree program, opening the Wakulla Environmental Institute and the TCC Gadsden Center, and reimagining the downtown Center for Innovation. He also thanked TCC students, staff and faculty for logging 50,000 hours of community service in 2016.

Sperry talked about the importance of TCC’s efforts in preparing the workforce of the future.

“They do a great job of getting feedback from the business community to make sure they’re meeting our needs. It was a no-brainer for my partner Bill Oliver and me to support this.”

Finkelstein recalled that when he became dean in 2004, he realized right away that the old-fashioned classrooms in his division needed to be updated. Now, thanks to the campaign, many of them have been renovated, and others will hopefully be “adopted” by donors soon.

“Now we can have a classroom with the latest technology. We have furniture that helps students collaborate. This isn’t about having attractive classrooms. The bottom line is to achieve the primary mission of this college, which is to enhance student success.”

Estiverne, who is a member of the TCC Honors program, said that as the child of immigrant parents, she knew it would not be easy to get a college education.

“I found myself having to choose between work and school. After I got my scholarship, I no longer had to worry about paying the rent or buying food. I finally got a chance to be a real college student, to dive deep into the subjects I am studying.”