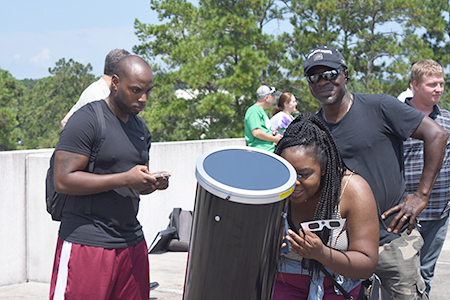 The crowd gathered at TCC’s observatory Monday, August 21, from 1 to 4 p.m., for an astronomer’s-eye view of a near-total solar eclipse, an unusual occurrence during which the Moon passes between the Sun and Earth.

“How often do you get to see this?” Michael Robinson asked. “I remember seeing one when I was a kid, and now I get to see one with my kids.”

Robinson attended the event with his family, including his children, TCC students Alicia and Stephen Robinson.

TCC meteorology professor Nancy Dignon was glad to see such a large number of students in attendance to view the eclipse.

“Look at all these students,” she said. “It’s the first day of class and they’re up here!”

Randy McKee, TCC professor of astronomy, and the Office of Student Affairs provided 325 pairs of specialized glasses for safe viewing of the eclipse, as well as access to two telescopes and other viewing devices in the observatory, located on top of the College’s parking garage.

TCC student Karla Fuentes said she believed experiencing the eclipse would inspire people to change for the better.

“I think it’s a spiritual awakening,” she said. “It’s like a fresh start.”

Anthony Jones, TCC’s dean of science and math, was pleasantly surprised by the large and diverse turnout.

“We had expected 50 to 75 people to show up,” he said. “This is almost like a homecoming event, getting to see all of these people together.” 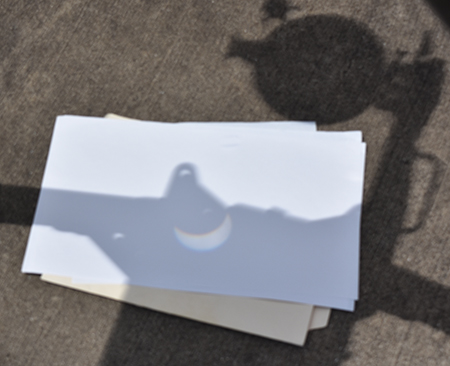 Jones credited the success of the event to McKee’s vision, as well as the assistance of science lab manager Alan Stuart-Tilley and senior science lab assistant Mike Mitchell in the setup and use of the telescopes.

The Big Bend area experienced approximately 86% totality at the eclipse’s peak shortly after 2:30 p.m. The path of 100% totality—a roughly 70-mile-wide swath of complete darkness—crossed the United States from Oregon to South Carolina.

“All you need is something like this to spark the interest,” she said.

TCC will experience a total solar eclipse in 2045, when Tallahassee will be in the path of totality.