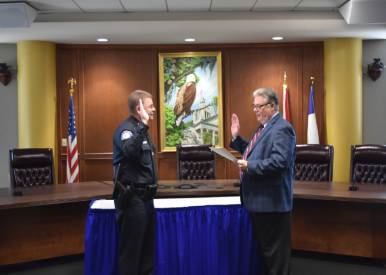 Gibson has 27 years of experience in law enforcement. He began his career in 1990 with the Tallahassee Police Department, where he received the Medal of Bravery for actions taken in the line of duty. He has since moved up through the ranks, working for agencies such as the Florida Department of Environmental Protection and the Florida Fish and Wildlife Conservation Commission. At FWC, Gibson oversaw statewide intelligence, investigations, technology, fleet services and the training academy.

Gibson is a TCC graduate who received a bachelor’s degree in criminology and a master’s degree in political science from Florida State University. He is also a graduate of the Administrative Officers Course at the University of Louisville’s Southern Police Institute and the Chief Executive Seminar at the Florida Criminal Justice Executive Institute.

"I am honored and excited to rejoin the TCC team in this capacity,” said Gibson. “The TCC Police Department is staffed by people who are committed to student success and campus safety. We will continue with the tradition of courteous service that our students, faculty, staff and guests expect and deserve."