TALLAHASSEE, Fla. (November 29, 2017) – What started as a class project at Tallahassee Community College became a statewide campaign to save lives in Florida. 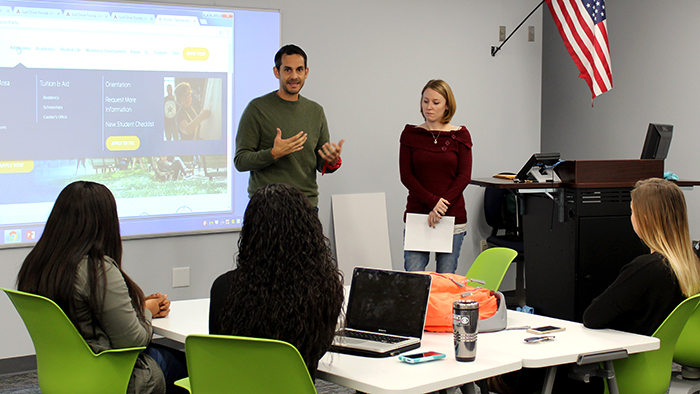 TCC professor Reggie Grant tasked students in his mass media class with creating projects to help persuade young people to put their phones down when driving. The student winners were announced at an award presentation on campus on Tuesday, November 28.

The assignment was inspired by Demetrius Branca, whose son Anthony, a TCC student, was killed by a distracted driver in November 2014. Branca and his wife, Melissa, attended the awards presentation along with several members of the College’s community, including TCC President Jim Murdaugh.

“Distracted driving has the potential to affect all of us personally,” Branca said. “Anthony was killed because of one driver’s poor choice behind the wheel.”

Each team of students worked for four weeks to create a website and a public service announcement video. The Anthony Phoenix Branca Foundation served as the client for the task and awarded $500 to the team that created the best project, as judged by a panel at Sachs Media Group. The winning team consisted of students Madison Coulter of St. Johns and Serenity James and Nicole Mendez of Tallahassee. 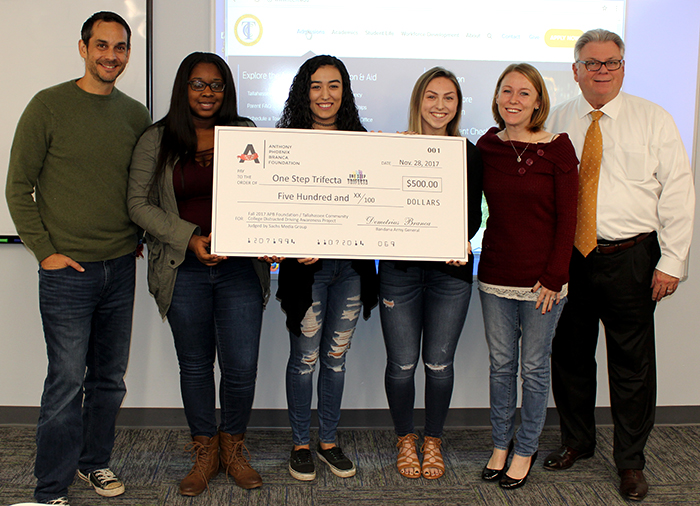 The second-place team, which received $150, consisted of Ashley Ma of Palm Harbor, Shawn Morancy of Tallahassee and Jeffrey Prokop of Tampa.

The foundation will use elements from the TCC students’ projects to create a statewide public awareness campaign titled “Put Down the Phone. #JustDriveFL.”

Students recorded short videos to share on social media with the hashtag #JustDriveFL that explain why it is important to put down the phone while driving, and provided photos of themselves with testimonials that will also be shared on social media. The foundation encourages Floridians, especially young people, to do the same.

One student team created a petition on Change.org to support their campaign. The petition, which asks Florida Governor Rick Scott and members of the Florida legislature to strengthen the law to help curb distracted driving, will be promoted on social media as well as on the foundation’s website, apbfoundation.com.

Another team created a car window sticker symbolizing a pledge that drivers will refrain from cellphone use when behind the wheel. The stickers will be sold by the foundation via its website, with proceeds supporting the foundation and its mission.

There are 50,000 distracted driving crashes each year, more than five every hour, according to the Florida Department of Highway Safety and Motor Vehicles. Those crashes result in 3,500 serious injuries and more than 200 deaths.

Texting and driving is not a primary offense in Florida, which means law enforcement personnel cannot pull someone over for using a phone behind the wheel unless that person is breaking another law.

Sage Hansard, a TCC student and Sarasota native, said working on the project forced her to consider her own driving habits.

“It helped open my eyes to a topic I was aware of but chose to ignore,” said Hansard. “Hopefully our project can do the same for others.”

“We all have the power to save lives and the responsibility to pay attention when we drive,” Branca said. “This fight belongs to everyone.”

Links to the student-produced videos and other materials are available at the campaign’s website, https://apbfoundation.com/just-drive-florida.