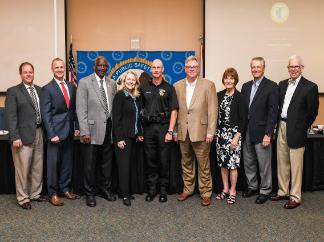 At the March 2019 District Board of Trustees meeting, the Trustees featured Robert Roddy during the Student Spotlight segment.

Robert is enrolled at TCC’s Florida Public Safety Institute (FPSI), where he is training to be a law enforcement officer at the Pat Thomas Law Enforcement Academy (PTLEA).

Born and raised in Adamsville, Ala., Robert knew from the beginning that he wanted to serve his community.

“I had a dream to be a police officer… my next door neighbor was the Adamsville Chief of Police,” said Robert. “I always admired him because of how he carried himself and how he communicated with others.”

The journey to this part in Robert’s life was a long one. He enlisted in the Marine Corps when he was a junior in high school and retired after 24 years of service.

From there, Robert started at TCC.

“I loved TCC because it was small and extremely veteran-friendly,” said Robert. “As an older veteran attending college for the first time, the class sizes and welcome I received was exactly what I needed. The professors were amazing, and I loved the atmosphere.”

After graduating with his A.A. degree in 2016, Robert transferred to FSU to obtain his Bachelor’s degree. He will graduate in May with a degree in Criminology.

“The quality of the instructors, staff, education and training I have received thus far at [PTLEA] has been incredible,” said Robert. “These instructors care for the students and want to teach the students in order to keep them safe on the streets and be successful in their careers.”

Currently, Robert is employed and sponsored by the Tallahassee Police Department while he attends the PTLEA.

“I am blessed to have the opportunity to be a part of the Law Enforcement Basic Recruit Class 475, said Robert. "I look forward to fulfilling my dream and serving the city of Tallahassee as a police officer."