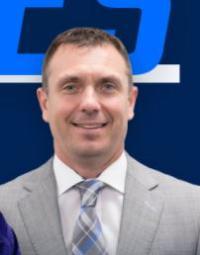 A native of Hampton, Virginia, Moore earned a degree in Business Administration from Christopher Newport University and a Masters in Sports Management from American Public University. Moore began his collegiate basketball coaching career at Patrick Henry Community College in Martinsville, Va., where he posted a record of 48-16. Patrick Henry was a perfect 16-0 in Region 10 in 2008-09, earning Moore Region 10 Coach of the Year honors. His 2007-08 team won the VCCS State Championship, and Moore's success with the Patriots earned him election into that college's Hall of Fame. Moore then served as an assistant coach at Randolph-Macon College (2010-12), helping the Yellow Jackets compile a record of 46-12, while making two NCAA Division III National Tournament appearances and winning the 2011 ODAC Regular Season and Tournament Championships.

“I am honored and blessed to be the next Director of Athletics at TCC,” said Moore. “I cannot thank Dr. Rowland and President Murdaugh enough for entrusting me with the responsibility of leading the student athletes and coaches. There is a rich tradition that has been established by Rob Chaney and his predecessors. I plan on building on those traditions with an influx of passion, energy, and a vision that will impact our student athletes' experience while engaging the campus, alumni, and community that has always supported TCC athletics. This is an unbelievable time to become part of the team at TCC and I will give every ounce of my energy ensuring that we are developing the type of student athletes that will go into this world and make a positive impact. We are going to have a winning culture in more ways than just hanging banners, which we definitely plan on doing also!”

Moore will succeed Rob Chaney who left TCC in October 2021 to become the associate director of the Florida College System Activities Association (FCSAA). His expected start date at TCC is December 1, 2021.

In addition to his experience in collegiate athletics, Moore coached the 2018 Gold Medal USA U18 Men’s National Team.