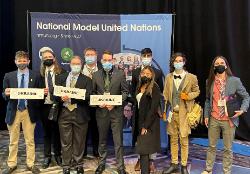 Tallahassee Community College Model United Nations (TCC MUN) traveled to Washington, DC, for National Model United Nations – DC, held from November 5 through 7, where they joined more than 850 delegates from 81 American Colleges and Universities, each representing a different country in discussing and finding solutions to important international issues. The conference featured a crisis simulation and briefings by distinguished speakers from the Washington, DC diplomatic community.

TCC MUN delegation represented the country of Ukraine and earned two awards. One award went to a TCC delegation for their excellent position paper written in preparation for the conference, and the second went to the entire team, recognizing their “honorable” performance in committees.

The team will soon turn their attention to planning the 26th Annual Tallahassee Southern Model United Nations Conference which will be held on Friday, February 11, 2022 for the region’s middle and high school Model UN students. They will also begin preparations to represent the country of Malaysia at National Model United Nations – New York in April of 2022 where students from around the world are expected to attend.