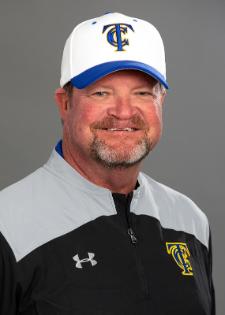 Longtime Tallahassee Community College head baseball coach, Mike McLeod, will coach his last regular-season home game at Eagle Field on Wednesday, April 27. The first pitch is scheduled for 6:00 p.m. The College will host a pregame reception at 4:30 p.m. at the Eagle Field Pavilion. Former players and fans are invited to attend.

“During a coaching career that spanned three decades, Mike impacted the lives and careers of countless student-athletes,” said Sheri Rowland, Vice President for Student Affairs at TCC. “I know I speak for the many people who have had the opportunity to work with him over the years when I say that Mike leaves an indelible mark on the College and the baseball program. On behalf of the entire College, I thank him for his contributions and loyalty. We wish him a very happy retirement.”

The Eagles have their sights set on an FCSAA Tournament appearance in May. They are currently in second place in the Panhandle Conference standings, two games in front of third-place Northwest Florida State College.

If the Eagles hold on to their place in the PC standings, they will travel to Ocala, Fla., May 6-7 for a best-of-three series against the College of Central Florida, which has already clinched the Mid-Florida Conference Championship. Winning that series would punch Tallahassee’s ticket to the final round of the FCSAA Tournament, May 12-15 at Publix Field at Joker Marchant Stadium in Lakeland, Fla.

Mike McLeod was named head coach on September 4, 1990, tasked with restarting a program that had been dormant for 20 years. During his tenure, the Eagles have won five outright Panhandle Conference Championships (1995, 1999, 2004, 2009, and 2013), and were named co-champions in 2002. He was named Panhandle Conference Coach of the Year in each of those five outright championship seasons. In 2002, he was part of the inaugural class of inductees into the Eagle Athletics Hall of Fame.

“Coach Mac is the epitome of what young coaches should aspire to be like,” said Chuck Moore, Director of Athletics at TCC. “He is not only extremely knowledgeable, but he is genuine and honest. His commitment to TCC for 32 years shows the type of man he is to the core.  With the support of his wife Rose, he has established TCC baseball as a perennial powerhouse in the state.  It has been an honor to work with him during my short time at TCC; he will be sorely missed.”

A lifelong resident of Tallahassee, McLeod graduated from Godby High School. His success as a standout prep pitcher for the Cougars served as the foundation to a successful pitching career. McLeod got his first taste of NJCAA baseball in 1974, as a player at Middle Georgia College in Cochran, Ga. In his only season with the Warriors, McLeod compiled an 8-2 record, authored two no-hitters, and earned All-America honors from the NJCAA. McLeod returned to his hometown to play the final three years of his collegiate career at Florida State University where he went 12-3 and hurled a third career no-hitter.

In 1982, McLeod accepted a position at Florida State under legendary coach Mike Martin. It was during his nine-year stint (1982-90) as pitching coach with the Seminoles that McLeod earned his reputation as one of the nation’s premier pitching instructors. His efforts played a large role in Florida State’s rise to national prominence with three College World Series appearances in 1986, 1987, and 1989. As an assistant with the Seminoles, McLeod was also part of seven straight Metro Conference championship teams (1983-89). During his final season at Florida State, his staff led the NCAA in earned run average.

“Mike McLeod is the epitome of a coach. He always put his players first and worked diligently towards making FSU and TCC powerhouse baseball programs,” said former FSYU Head Baseball Coach, Mike Martin Sr. “Although he was a relentless competitor, he cared more about the young men being successful in life. Carol and I want to wish Mike and Rose a wonderful retirement.”

McLeod has coached five NJCAA All-Americans, including A.J. Johnson, the 2004 NJCAA Player of the Year. His Tallahassee honor roll also includes more than 20 All-FCSAA selections, more than 100 All-Panhandle Conference picks, and 19 players who received academic honors from the NJCAA.

McLeod has coached six future Major Leaguers - the latest being Lorenzo Cain, who was an American League All-Star Game starter and won a World Series ring with the Kansas City Royals in 2015 and was the American League Championship Series Most Valuable Player in 2014. Cain joins the following players on the Eagles' MLB Alumni list - the late Ryan Freel, Brandon Jones, Mike Metcalfe, Juan Padilla, and Michael Saunders, who also suited up for Team Canada in the 2008 Beijing Olympics.

Mike and his wife, Rose Marie, who was a cheerleader at FSU, have two children - daughter, Jennifer Marie, and son, Garrett, a former college baseball standout at Tallahassee and Embry-Riddle. Garrett and his wife, Carrie, a former track standout at Florida State University, are the proud parents of daughters, Alena, Evie, and Isla, and son, Maddox.