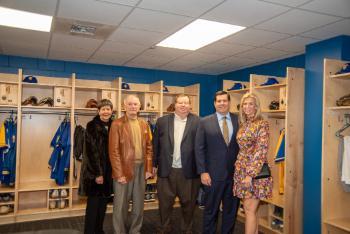 The facility was named in honor of Wayne and Betty Edwards who have been involved in TCC athletics for many years. Wayne worked on the hiring committee that brought coach Mike McLeod to TCC. Wayne and Betty’s son, Chris, attended TCC and played first base on the baseball team in the 1990s.

The Edwards family donated $100,000 to the Raising Our Game: TCC’s Campaign for Athletics. “Supporting the TCC Athletics Program in their first ever campaign was a very easy decision for my family as we know first-hand the benefits of this program and what I can mean to those seeking to play post-high school sports,” said Wayne Edwards. “We are pleased to be able to provide support.”

During the unveiling event, TCC’s President Jim Murdaugh, thanked members of the TCC Foundation President’s Circle donors and the Edwards family for their support of the College.

The Raising Our Game campaign is still seeking investments to help in two areas of the athletics program; Facility Enhancements and Endowed Student-Athletes Scholarships. To join the team and give back please visit Athletics Campaign - Tallahassee Community College (fl.edu).