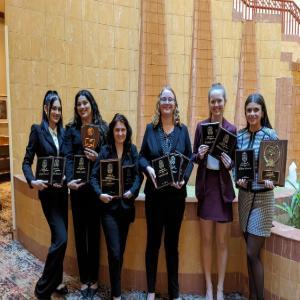 The TCC Forensics Team won its second consecutive national title in the Hindman Division at the Phi Rho Pi National Tournament in what has been an incredible year for the Eagles. Phi Rho Pi is the National Forensic Association for Two Year Colleges. The tournament took place from April 4 through 9 in St. Charles, Mo.

The team took second place in the junior college division and cracked the top 25 in the university division, coming in 22nd overall of 69 programs participating at the Pi Kappa Delta National Tournament in March which took place in Orlando. Elizabeth Blair was crowned national champion in drama, with Allison Grove, Tiffany Canseco, Amanda Holton, and Madison Reed bringing home superior and excellent awards.

The team is planning a live encore performance in May for friends, family, and the TCC community.