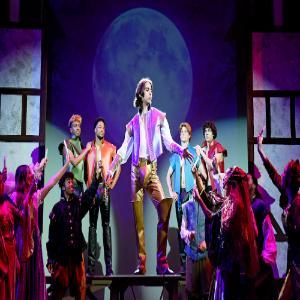 Theatre TCC!’s 2021-2022 productions of Eurydice and Something Rotten! earned “Superior” ratings from the Florida College System Activities Association (FCSAA). Superior is the highest rating the FCSAA awards, only reserved for theatrical productions that lie between the 96 to 100 percent mark on the state community college level. This is the first time in the College’s history that two productions received “Superior” ratings within the same season.

Eurydice received the highly coveted “Innovation” award for its innovative use of lights, sound, and projection to create an enthralling landscape for the actors to perform in and to immerse the audience into the world of the play. Based on the classic myth of Orpheus, after dying too young on her wedding day, Eurydice must journey to the underworld where she reunites with her father and struggles to remember her lost love. It is a play with a fresh look at a timeless love story.

“It was so nice to be able to go back to my Alma Mater and see such a technically innovative production," wrote adjudicator Raines Carr from Chipola College.

Something Rotten! had an overall attendance of 1,486 people during its two-week run. Based on a book by Karey Kirkpatrick and John O’Farrell taking place during the Renaissance era, two brothers struggle to keep their acting company afloat but hope to soon create the world’s very first musical. They are desperate to out-Bard the Bard, William Shakespeare the biggest celebrity and playwright in England. The play was also awarded a “Superior” rating from Gulf Coast State College’s Associate Professor, Jason Hedden.

“The director led a professional team of students, faculty, and staff to create a fun and exceptional evening of theatre,” stated Hedden.

Additionally, select cast and production members earned individual awards. Skylar Weston acquired two awards for working as stage manager for both Eurydice and Something Rotten!, respectively. TCC students Madison Reed and Dakota Miller were recognized for their acting in Eurydice, while the director, Alexa Roddenberry; the lighting designer, Jacob Inman; and Wayne Almy the sound/projections designer received awards for their production work on the show. Caitlin Ostrowski and James Wright gained praise for their performances in Something Rotten!.