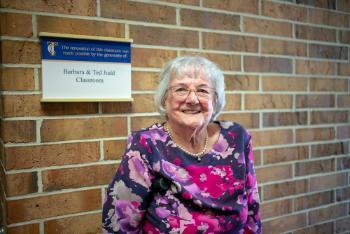 The Tallahassee Community College Foundation has received an $88,000 donation from the Barbara Judd Trust for its Athletics Campaign.

Barbara Byers Judd, originally from New Haven, CT, earned degrees from Boston University and American University. She became a journalist and editor in Washington, DC. In 1975 she married Ted Judd, a pilot for Eastern Airlines. They moved to Tallahassee in 1990, having chosen a town that had "good sports, good theatre, interesting politics and four seasons, none of which was winter." Barbara passed away on February 26, 2022, at the age of 91.

The Judds touched the lives of so many people (and animals) in the Tallahassee area through their generosity of time, money, and spirit. She was a volunteer and supporter of organizations such as the Tallahassee Museum, Theatre Tallahassee, the Tallahassee Police Department, and Florida Wildlife Magazine. Barbara was a co-founder of the Democratic Club of North Florida and a member of the Leon County Democratic Executive Committee. She had a wall filled with cherished awards of appreciation for outstanding service from the many organizations she served – including the prestigious Silver Star Award from the Tallahassee Senior Center Foundation.

She loved TCC – especially our arts programs and our sports.  Barbara was a long-time donor to the TCC Foundation, establishing a Theater Scholarship and supporting the renovation of a Theater Classroom.

“Barbara was such a great friend to Tallahassee Community College,” said Heather Mitchell, Vice President for Institutional Advancement and Executive Director of the TCC Foundation. “She was invested in our work here at the College and loved hearing from our students. She attended many events on our campus and got engaged in our scholarship process. She will be missed, but her legacy will live on at TCC.”