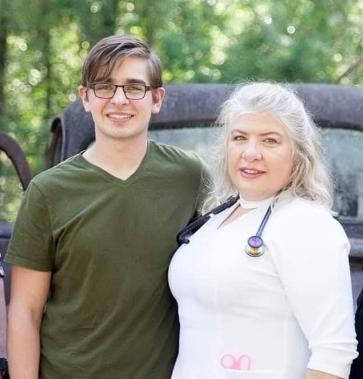 Graduating with a nursing degree is quite the achievement but earning that degree with a family member makes it much more special. For Kathryn and Richard Deal, this mother and son duo can expect to receive their degrees from Tallahassee Community College on May 2. Kathryn is earning her Bachelor of Science in Nursing (BSN) degree and Richard is earning his Associate of Science in Nursing (ASN) degree. They are among more than 3,000 TCC students who comprise the Class of 2020.

Kathryn is no stranger to TCC. She earned her associate degree from the College while working in law enforcement. Kathryn said after retiring from being a Florida Highway Patrol State Trooper she wanted to start a second career. She said her son inspired her to apply to the nursing program because medicine is a field she always found interesting. But graduating with Richard, one of her triplets makes it memorable.

“This is a unique moment that I am able to have with one of my sons,” Kathryn said. “Richard is the oldest of the three and with each child you try to have something special. This has been my push to get through the program.”

Richard said he’s proud that his mother decided to make a career change and enroll back in school. Oftentimes they served as each other’s cheerleader to push through challenging courses.

“The program is strenuous,” Richard said. “Anybody you can make friends with and study and share notes with definitely helps. Luckily, I could do it with my mom.”

Richard said he wanted to become a nurse because it is a very noble career. He said TCC prepared him for the workforce.

“We have a very good clinical reputation,” Richard said. “Whenever you’re at clinicals you see how much the work you actually put in prepares you to be a nurse.”

Despite, being each other’s support system, there still was some friendly competition among them.

“You get competitive and it helps you build each other up,” Richard said. “It’s good to compete because that way you’re on your ‘A’ game. But it’s also helpful to have someone go through the program and be there for you because it is a stressful process.”

The Deals both said the TCC nursing professors really equipped them for the next phase of their lives. Kathryn plans on starting a nurse practitioner program in the fall and Richard said he wants to join the workforce and has been applying to nursing jobs. They encourage people to take that first step and apply to TCC’s nursing program if it is a career choice they truly desire.

“Dreams that you had when you were younger you still can pursue,” Kathryn said. “If you have the inspiration, find a way to make it work for you and your family. If you don’t, nothing will change.”