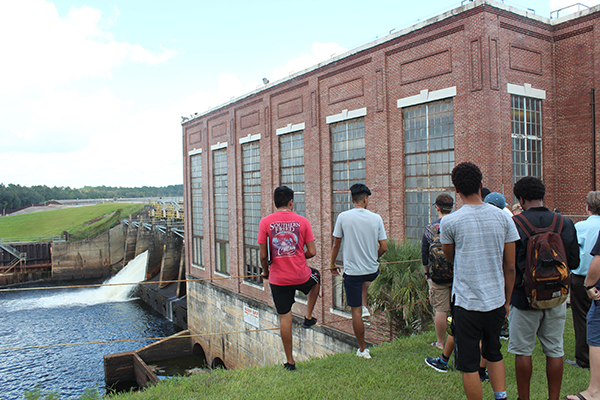 Tallahassee, Fla. (October 25, 2017)—Tallahassee Community College instructor Bret Hammond knows that the students in his Introduction to Engineering Technology class have a wide variety of career goals, so he exposes them to many different aspects of engineering during their time in the class.

“Every semester I have students interested in architecture, engineering and interior design. However, most have very little idea what those professions offer as it relates to career goals,” said Hammond. “The intent of this class is to combine textbook applications with real world field trips to allow students to understand how a career in those fields may unfold.

Recently, Hammond took class members to visit the City of Tallahassee’s C. H. Corn Hydroelectric Generating Station on Lake Talquin and the Ochlockonee River. In class, they had already studied the human and environmental impacts of dams, how dams are constructed, and how turbines generate power. 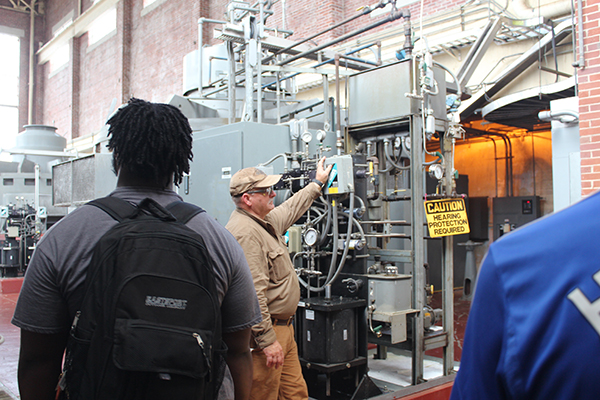 City of Tallahassee employee Bobby Stafford led students through the facility, where they got a close-up look at the turbines and other equipment that allow the plant to generate electricity. Stafford also talked about the technology used to monitor the lake level and in-flows and out-flows of water into the lake from rain that occurs locally or upriver.

Once outside, students viewed the dam and its auxiliary spill way and enjoyed a demonstration of its operation when Stafford increased the flow from the dam by a foot and created a roaring “rapid” right below their feet.

The City of Tallahassee has proposed shutting down the Corn plant because the power it produces is expensive. The City hopes to invest those savings in a solar electricity generating facility it is developing to produce electricity less expensively. Both Hammond and Stafford discussed the advantages and disadvantages of hydroelectric power and the Corn facility in particular.

Student Joseph Smith said he learned a great deal from the field trip, especially because he is from the Miami area and had never seen a dam before. Like many of Hammond’s students, Smith plans to attend the FAMU-FSU College of Engineering after graduating from TCC. However, several students in the class instead plan to earn an Associate in Science degree in Engineering Technology from TCC and enter the workforce directly.

“As technology continues to evolve, there is ample room for persons with an A.S. degree to develop a successful career,” said Hammond.