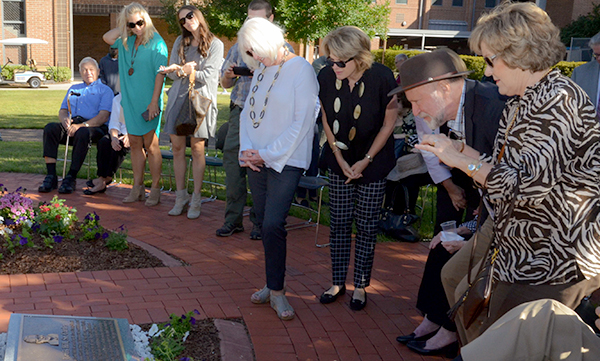 TALLAHASSEE, Fla. (October 23, 2017) – The garden surrounding the flagpole at the center of Tallahassee Community College’s main campus has been named to honor one of the College’s founding fathers.

The Louis Hill, Sr. Garden was dedicated to Henry Louis Hill, Sr. by his family in honor of TCC’s 50th anniversary in 2016. A bronze plaque recognizing Hill was unveiled in a ceremony Friday, October 20, with about 40 people in attendance.

“Louis was individually responsible for the efforts to create Tallahassee Junior College,” said TCC President Jim Murdaugh. “We are so honored and privileged to carry on his legacy.”

Hill served on the Leon County School Board from 1953 to 1964 and initiated the establishment of Tallahassee Junior College, which opened in 1966 on the Godby High School campus. He was then appointed to serve on the State Junior College Board.

TJC would be renamed Tallahassee Community College shortly after its opening.

“It is wonderful for our family and the College to be able to honor him,” said Almena Pettit, Hill’s daughter and a member of the TCC Foundation Board of Directors. Pettit joined Murdaugh and Heather Mitchell, the TCC Foundation’s executive director, in delivering remarks at the unveiling ceremony.

Pettit added there is already a TCC scholarship endowed in her father’s memory, courtesy of her mother, Mart Hill, and the family.

Attendee and family friend Anne Jolley Thomas said Hill and her father, Pat Thomas, worked together with other early adopters to make TCC a success out of their dedication to improving opportunities for area students and the community as a whole.

“They didn’t want the credit. They just wanted to do what was right,” said Thomas, whose father’s name still welcomes prospective public servants to the Pat Thomas Law Enforcement Academy at the Florida Public Safety Institute.

Hill, a banker by trade, was also instrumental in passing state and national laws to promote college student loan programs.

Mitchell noted in her introduction that Pettit was the first person she contacted when she was named director of the TCC Foundation, based on the Hill family’s deep connection to the founding and history of the College.