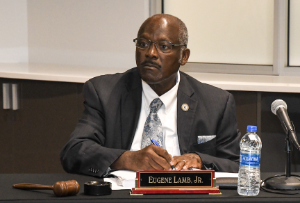 Governor Ron DeSantis has reappointed Eugene Lamb, Jr. to another term on the Tallahassee Community College District Board of Trustees.

Lamb was first named to the TCC board in 2007 representing Gadsden County and was reappointed to three additional terms in 2012, 2015, and 2019.

“We greatly appreciate the Governor’s reappointment of Trustee Lamb,” said TCC President Jim Murdaugh. “With his more than 15 years of service on the Board, the impact of Trustee Lamb’s leadership cannot be understated. He is a champion for Gadsden County and all our TCC students.”

Lamb taught in the Leon County School District for 30 years. He also served on the Gadsden County Commission for eight years, chairing the board from 2008 to 2010.