This year’s seminar features 28 Bloodhound teams from eight states which are Alabama, Florida, Georgia, Michigan, Minnesota, North Carolina, Texas and Wisconsin. The teams represent both law enforcement agencies, as well as civilian search and rescue (SAR) teams. It should be noted that civilian SAR teams are predominantly all volunteers.

The teams are exposed to the diverse environment of FPSI’s 1,500 acres, including thick wooded terrain, wetlands, streams, and bodies of water, as well as residential and other urban areas. Training is conducted during the day and night.

The Bloodhounds are renowned for their keen tracking abilities and are commonly the go-to for missing persons. The FPSI Bloodhound program originally began as a collaboration between the Florida Department of Law Enforcement (FDLE) and the Jimmy Ryce Center, hosted by FPSI. Seventeen of the participating Bloodhounds had been donated by the Jimmy Ryce Center through the years. 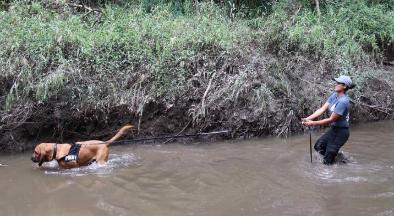 Special appreciation is extended to Gadsden County and the City of Gretna for the use of the, now closed, Gretna Elementary School, and to Florida State University (FSU) for the use of Alumni Village. These are tremendous training venues. The seminar would also not be a success without the handful of volunteers ‘track layers,’ from multiple states, who walk and run the many miles of harsh terrain, leaving their scents for the Bloodhounds to track.