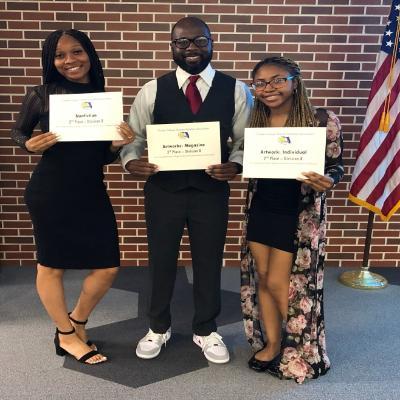 “The 2021 student staff worked exceptionally hard to present the 40th edition of the magazine in a singular way, while meeting unique challenges presented by the pandemic and an accelerated production schedule,” Costantino said. “They have most certainly earned this recognition of their efforts in showcasing the outstanding creativity from our students at the College.”

The Talon placed third overall for General Excellence for Newspapers in the FCSPA awards contest. The Talon earned first-place awards for News Photo and Picture Story and third place awards for News Story and In-Depth Reporting. Former TCC student Jackson Prebe earned the awards for a story about students protesting and demanding police reform and a story about a local organization’s efforts to address food insecurity in the community. Prebe also won an Inner Circle award for placing in three or more categories.

Reggie Grant, Associate Professor of Journalism, is the adviser of the Talon.

“Since the Talon transitioned from printing a physical newspaper to publishing online, it has been challenging keeping the student newspaper relevant,” Grant said. “These awards highlight the hard work that TCC students are doing to keep the Talon’s award-winning tradition alive.”

Donmetrie Clark is the Dean of Communications and Humanities.

“I am always proud and amazed at the talent behind the Talon and the Eyrie! The pandemic presented many challenges to our students, but our students did not let the pandemic become a barrier to their interest and creativity,” Clark said. “I believe the awards are a testament to this, so congratulations, once again, on a job well-done!”