Eugene Lamb Elected Chair of TCC District Board of Trustees 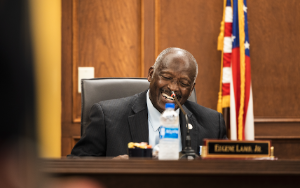 The Tallahassee Community College District Board of Trustees elected Eugene Lamb, Jr. as chair at their August meeting this week.

Lamb has served on the Board since 2007 when he was appointed by Governor Charlie Crist and has since been re-appointed to five consecutive terms by Governors Rick Scott and Ron DeSantis. He has also been elected to three previous terms as chair of the Board at TCC. The Army veteran and former teacher represents Gadsden County.

“Eugene’s dedication to TCC and the residents of Gadsden County is without question,” said Moore. “With his many years of service to the College, his extensive experience as an educator, and his outstanding reputation in the community, Eugene is the ideal chair to lead us over this next year by continuing to build on our many successes.”

“Trustee Lamb has a commitment to TCC that is really remarkable,” said Dr. Jim Murdaugh, president of TCC, following Lamb’s most recent re-appointment. “When we say that he helped build TCC into what it is today, we mean that literally. When the College was being built in 1966, Eugene jogged to Tallahassee from his home in Midway and helped with the construction of the first buildings here at TCC. His long-time service on the District Board of Trustees is appreciated.”

Outgoing chair Eric Grant also announced his resignation from the Board in order to better focus on his professional role as Vice President and General Manager of CivicPlus. He was originally appointed to the board in July 2018 by Governor Rick Scott and was reappointed in 2021 by Governor Ron DeSantis.