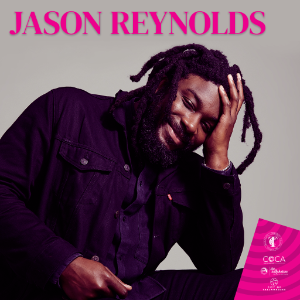 Reynolds is a #1 New York Times bestselling author, a Newbery Award Honoree, a Printz Award Honoree, a two-time National Book Award finalist, a Kirkus Award winner, a Carnegie Medal winner, a two-time Walter Dean Myers Award winner, an NAACP Image Award winner, and the recipient of multiple Coretta Scott King honors. He is also the 2020-2022 National Ambassador for Young People’s Literature. In this role, he travels the country talking to young people about reading and writing and he gets to further his mission to NOT write boring books.

Reynolds has made numerous appearances on national television including Good Morning America, CBS Sunday Morning, The Daily Show with Trevor Noah, Late Night with Seth Meyers, and 60 Minutes, and has been featured in publications including The New Yorker, Fast Company, Time, The Washington Post, and People.

His many books include All American Boys (cowritten with Brendan Kiely); When I Was the Greatest; The Boy in the Black Suit; Stamped; As Brave as You; For Every One; the Track series (Ghost, Patina, Sunny, and Lu); Look Both Ways; Stuntboy, in the Meantime; Ain’t Burned All the Bright and My Name Is Jason. Mine Too. (both with Jason Griffin); and Long Way Down, which received a Newbery Honor, a Printz Honor, and a Coretta Scott King Honor. He lives in Washington, DC. Learn more at JasonWritesBooks.com.

TCC is the presenting sponsor of the Word of South Festival of Literature and Music, which is hosted annually in April at Cascades Park. For more on the festival visit WordOfSouthFestival.com.